Conductive Ink Pens have taken the world by a storm. The pen is like an ordinary pen but uses a particular type of special ink called the Conductive ink. The special thing about this ink is that it conducts electricity. Typically created by fusing regular ink and graphite or any conductive material together to give it conductive properties.
Traditional industrial standards incorporate the use of copper for laying down conductive traces to make a circuit. But this method has more complications than using conductive ink as the ink can easily be printed on any surface to make traces.

Most of the Integrated Circuits use a special type of surface while using copper because more rigidity and low resistance are preferred. Printed paper and plastic sheets have characteristics that pose problems while using copper traces, like high resistance and extreme lack of rigidity. Conductive ink solves this problem by being so efficient on any surface. Just draw a closed loop and pass electricity through it. Voila! You have a working electrical circuit on paper. Since the inception of conductive ink, many people have started using it instead of using breadboards or wires. It is wireless and hassle-free. Circuits made from conductive ink resemble the circuitry in a chip, just that it’s on paper, and anyone can do it.

Since Circuit scribe has been a trend setter with its innovative idea, this had to be the first entry on this list. The Circuit scribe Non- toxic silver conductive ink pen has been funded by over 12,000 supporters on their Kickstarter campaign and has already established its mark in the industry. The product has managed to live up to its initial hype and performed consistently marking dominance in the market even today.

This highly conductive ink pen weighs a mere 0.8 ounces, which is just as much as a regular ink pen making it easy and convenient to create circuits with it. Moreover, it can write on any surface that is suitable for a regular roller ball pen. Apart from being the most successful conductive ink pens in the market in terms of both design and efficiency, this pen has a resistance as low as 0.05-0.2 ohms/sq/mil which is about 2-10ohms per cm of writing. The ink should easily draw 60-200 meters of conductive lines, based on the type of surface which it is used on. The tip is a 1mm fine ball tip which can create fine yet skip free conductive lines ideal for making cards, DIY projects for children and adults alike. The simple and minimalist design makes it attractive to use. 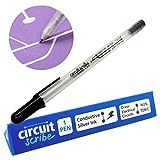 The next product to get featured on this list is a conductive electric paint pen by Bare conductive. It is a 0.8 ounce tube like pen with conductive electric paint. It can mark on most surfaces allowing you to create new circuits or fix loss of contacts in existing circuits without the hassle of soldering. The paint has a very low resistance, and the conductance will increase on drying. It is a lot like water based paints in texture and usage, only it is a conductive liquid. The liquid however must be used within 6 months.

The paint is a non-toxic, solvent free and water soluble, which means if you make a mistake while drawing a circuit; it can be erased from most surfaces like a PCB with just soap and water. It dries quickly at room temperature once applied. It meets EINECS/ELINCS and TSCA safety standards; making is safe for use by children for their mini projects etc. It can be used in circuits which have components such as LED, alligator clips, transistors, ICs and batteries of 9V or 12V. In addition to this, it can be used to fix any existing conductive traces.

The MG Chemicals Nickel Conductive Pen comes in a 5mm container which makes the body of the pen. The design resembles that of a whiteboard marker and gives a great grip while writing. The tip is 1mm and allows fine lines and tricky fixes on circuit boards. It is capable of writing on a wide range of surfaces, starting from epoxy, plastics, copper, other metals, paper and most other electronic substrates and surfaces. The volume resistivity is as low as 0.0068 ohms-cm. Since the conductive ink includes Nickel as the main ingredient, the pen can be used for wide range of temperatures. It works great for any temperature between -40 degrees Celsius to 120 degree Celsius. The tip of the pen is a valve tip which opens when pressed onto a surface. You may have to squeeze the body of the pen to allow the liquid to flow out and mark smoothly on the surface. Although it might take a while to get used to drawing circuits with this pen, it has one of the quickest drying conductive inks available in the market and makes excellent conductive, corrosion resistant and durable lines. It is almost unbelievable how this pen glides on any surface leaving behind a trail of conductive ink.

If you are looking for a highly conductive ink pen that is easy to use, yet effective, this is the pen for you. The Circuit Writer conductive ink pen is a 0.8 ounce marker like pen which makes drawing circuits on any surface child’s play. You can also correct minute discontinuities on any electronic substrate. Fixing PCBs with this pen is easy and quick.

Manufactured by CAIG Labs, this pen has quick drying ink which turns conductive on drying and can be a savior while making small corrections in circuit boards or cables. Let your kid explore the world of electronics with this safe to use conductive ink pen. The ink is specially formulated to adhere on to most surfaces used in electronics and also on paper. It can be used in projects that are powered by a 12V battery. The body of the pen is made of plastic which makes it lightweight. Kids are sure to love this one for the ease with which it marks and how effortless it feels. 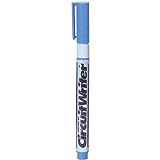 How conductive ink is made?

In basic terms, an aqueous solution of silver nitrate is combined with polyacrylic acid and diethanolamine, which serve as the capping agent and the reducing agent respectively. Particles of about 5 nanometers are formed after 22 hours. The size of the particles is insufficient, and the required size is about 400 nanometers. To achieve this, a device which generates high-intensity ultrasound, a sonicator, is used. After the process is over, a thick insoluble precipitate is scooped out, and ethanol is mixed with it to coagulate the particles, which means to convert their liquid state to a bit more solid. Apart from the top layer of the liquid, everything else is centrifuged. After centrifugation, the particles are transferred back into water through a syringe filter. Hydroxyethyl cellulose is mixed, serving the purpose of a binder, and the resultant mixture is homogenized. To achieve a particular thickness or viscosity, the solvents are allowed to evaporate. After that, it is transferred to a roller ball pen.

To the people who haven’t been in touch with chemistry for a while, this is complete hogwash. If your chemistry is good then you might understand this process. But don’t hurt your head understanding this. You don’t have to make it, you just gotta use it.

Circuit Scribe is the first pen to utilize this ink, and it got heavily funded through its Kickstarter campaign. People loved the idea of using a pen that could make functional circuits, instead of using wires, breadboards, and other electrical components. If you love tinkering around with circuits or keep wanting to build cool stuff, do check out a conductive ink pen.

The world around us today is a huge hub of electronics and electrical equipment’s of various types. These equipment’s occasionally need attention and maintenance that might be a great deal of a hassle. Minor discontinuities in conduction or short circuits may lead to inconveniences in day to day activities. Previously, fixing them was a task in itself often requiring professional equipment. Also printing a circuit board was a task best left to the experts. Many hobbyists have been waiting for a product that can create conductive lines without a lot of effort and special devices. That is when the circuit mending, highly conductive ink, day saving pens made a grand entry.
Conductive liquids have been a breakthrough that has helped in a wide range of applications.

Right from complex engineering circuits to fixing a simple loss of contact of a television remote controller, conductive ink pens have successfully managed to save us a lot of trouble. These pens have gradually come to replace the conventional soldering and other fussy techniques. Now they are available for use for armatures and professionals alike. If you have or know an inquisitive kid, who would want to explore the world of ICs, resistors, LEDs, capacitors and other electronics these conductive ink pens will definitely be a delight for them. Since these pens are not battery powered and have inks that are nontoxic, you can be sure of the safety of your child while using them which may not be the case with other circuit making devices.

Another great advantage of these pens is the fact that they can mark on most surfaces including paper allowing you to have a circuit on paper conveniently. The pens have extremely low resistance, making them great conductors which can be erased when not required. This allows the circuit creator a significant amount of flexibility with the designs.

Professionals who often work on fixing circuits and creating new circuits can use these pens to do so. They can also be of use while trying out new circuit designs. Since the conductive ink is made of highly conductive materials, they can be used in PCBs of most standard equipments. This will not only bring down the repair time but will also make repair easy. In a nutshell, these pens have made creating a working circuit as easy as drawing it on a paper, literally!

Ratingy is a participant in the Amazon Services LLC Associates Program, an affiliate advertising program designed to provide a means for sites to earn advertising fees by advertising and linking to Amazon.com.